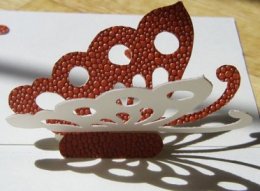 This is the “Hawk” from: “‘A Paradise of Origamic Architecture” by Masahiro Chatani and Keiko Nakazawa.
Masahiro Chatani is a Japanese architect and professor who made a lot of books with Origamic Architecture patterns. There are other designers as well (both mail and female) but, if I’m not mistaken, Masahiro Chatani published most of the Origamic Architecture books. He is the founder of these Origamic Architecture cards. Some books he made with others, like for instance his book “A Paradise of Origamic Architecture”. He created this book together with Keiko Nakazawa. Most Origamic Architecture artists work mainly with the books of these two authors. So, like mentioned before, Origamic Architecture card making finds it origin in Japan. Some books are translated in English; at the best of my knowledge, only one book is translated in Dutch (Origami, modellen om zelf te maken, Masahiro Chatani, 1984). Apparently, due to a lack of interest, it doesn’t justify translating more of these books into the Dutch language. However, ten years ago the Dutch “Vouwservice” had put a map together called “Werkmap” by Mr. Verkerk, by which one can learn the craftsmanship of making Origamic Architecture cards. Unfortunately The “Vouwservice” stopped doing business a while ago.
This is the “Butterfly” from: “Pop-Up Gift Cards” by Masahiro Chatani.
Alas, to make these cards one can only use very limited papers; in fact the only paper that is most suitable for making these cards is very thin cardboard. In his books, Chatani frequently mentions Kentpaper as paper to use for his patterns but it is impossible to get this paper. I’ve been in contact with other Origamic Architecture card makers in other parts of the world and they too have tried hard getting this paper, without any luck. Keiko Nakazawa (“Best Greeting Cards” and others) mentions Duna paper but same story here as there is for the Kentpaper. If someone knows where to get either of these papers, please let me know, I would appreciate it very much. Most paper, other than the thin cardboard I mentioned previously, are too thin or too thick to make these cards out of. What are Origamic Architecture cards you might ask. Well, let my try to give an answer to this question. In short, these cards are “Pop-up” cards that can be made in different ways. Let me tell you what I – in general – do to make a card: I transfer the design of my choice (either done by scanning the pattern and printing it out or with the help of transfer paper) onto the thin cardboard with a stylus. A stylus is a pen with a little ball at its end (sometimes one at each end with different measurements) and is ideal for transferring a pattern onto the cardboard.

This model comes from “Pop-Up Gift Cards” by Masahiro Chatani and is called “Wings”.

When I’m finished with the transferring, I’ll put as a reminder little points there where I have to fold the paper at the front or at the back of the cardboard (valley or mountain folds). When I’m done doing all of this I’m ready to cut the pattern out of the card stock there where I ‘ve placed marks to do so. After that I carefully fold the card, with above mentioned valley and mountain folds, into shape. However, when the pattern contains straight lines only I do it differently. In this case, I put a mark at the beginning and the end of a line. I do this with a very sharp (like a needle) kind of tool that goes all the way trough the paper and leaves a tiny little hole there. When using this method, one gets a perforated kind of pattern on the cardboard. I connect these marks together with a very sharp kind of, what we call, “Stanley” knife, only this knife is smaller than the normal “Stanley” knife. By cutting and folding, the “Pop-up” card is born. Since I have a scanner and a printer, I usually use a printout to press the pattern (as mentioned with a stylus) onto the stock board. This is a short and simple explained of what an Origamic Architecture card is.

Through contacts with other people that do OA, I’ve learned that there are different ways to make an OA card. A very quick method is to cut directly through a copy of a pattern onto the cardstock. This is not a very popular method by people that do OA, not in the least because the printout can get very ‘weak’ when several cuts are made and can slip away and cause miscuts. But sometimes, when a card has to be made in a hurry – which by the way is not a good attitude for this is almost not possible with these cards – one can try this method out.When one understands the formula of making Origamic Architecture patterns, meaning that you know the proportions of that what has to be cut with respect to the middle fold line (the middle fold line is the starting point), you can start to design your own patterns.

Designing cards oneself is very difficult. Nevertheless, I gave it a try and started to design OA cards a few years ago. In the beginning I had a hard time even though I started out with a simple design. Luckily over times I got more experienced in designing these cards and it stimulated me to continue to design more intricate and difficult patterns. From the beginning I’ve been focused on designing famous buildings out of Amsterdam for this is very rewarding because there are so many beautiful buildings in this city. One of my designs is our Amsterdam “Central Station”, it became a very large card for it is a very large building. In total it took me 6 weeks to design this one. I while ago I opened a page with these OA buildings on Internet and just recently I’ve added a page with Escher kind of patters called Escherpage. To fold a card a lot of patience and concentration is needed for making these OA cards is an accurate occupation; if one cuts a little bit too far, or cut the wrong line, it’s not unusual to have to throw the card away for it’s totally ruined. And that is very frustrating if a card is half or more than half way cut, a lot of time and energy is wasted if this happens. A very small and easy card can be made within an hour or so but larger and more intricate cards, very easily keeps you busy for a few hours. And than there are the ones that can take up to several days to make. For instance, “Central Station” takes me two days of cutting and folding to finish. So one has to invest a lot of time doing this craftsmanship.

Besides these cards that takes up hours, and even days to make, there are the – in my opinion – most difficult ones and in addition, cost a very long time to make. But they are, if you ask me and other OA artists, the nicest and most attractive cards in their kind, they are my – and others – absolute favorites. These designs I’m talking about are attached with strings to the back of the base of the card.Usually the patterns for these cards are made out of more than one segments. So one first copy (trough transfer paper or some other method) these many segments and then put them on cardboard with a stylus (or another method) and cut it all out, one by one.

These different segments of the cards with the strings are put together with little pieces of “washi” (handmade Japanese paper). When this is done, little strings are attached with washi and glue to some of the segments, there were it’s indicated. These strings now are getting through very tiny holes to the back of the base of the card. These strings are attached with glue and are covered by little pieces of washi paper. This manner the model is placed into the card and gets itself in shape every time the card is opened.. Examples of these cards with strings are “Globe”, “Snowhouse”, “Flower Garden” and “New Louvre”.I’ve made a lot of these cards; flowers, houses, figures and the biggest and most beautiful; a three storied pagoda. I’ve been working at least a week on this pagoda and it was hard for I didn’t have a clear explanation to go along with it so I had to figure it out by looking closely at the pictures of the pattern book.

Much to my regret, I have to say that a lot of these cards have eventually broken down. I’m very sorry to say that the glue didn’t hold the segments and the strings together after a period of time. This was very hard for me and I was very disappointed to see this happen. In the books they recommend photo glue as the glue to use and that is what I did. I’ve noticed however that this photo glue in general dries out very rapidly so I think that is what caused the problem. After all these cards had broken down, I didn’t want to make these type of cards for years because of this setback, I could not accept that these cards collapsed after a period of time. The effort that goes into these cards is just too much for this to happen. But they are so attractive that I could not help myself starting to make these cards with strings again after a period of time. While I wasn’t making these cards however, I did some experimenting with different kind of glues and got some feedback from OA friends. I now use invisible PVC glue and I’m happy to say that all the cards I made with this glue still holding up and I have good faith that they will keep doing so.
To the left: nameless tree from “A Paradise of Origamic Architecture” by Masahiro Chatani.

Now, coming to the end of my page, I would like to include a few links to some very interesting pages worthwhile looking at:
– http://webpages.charter.net/gstormer/ made by Gerry Stormer.
Three sites created by Marivi Garrido::
– http://marivi_10.tripod.com/index.html and
– http://www.geocities.com/vanesa_yo/index.html and her Heraldry page:
– http://marivi_heraldry.tripod.com/index.html
The site made by Selena Kim’s;
– http://members.aol.com/kselena/.
and last but not least the one made by Jun Mitani:
– http://www.page.sannet.ne.jp/jun_m/index-eng.html

This is a demo store for testing purposes — no orders shall be fulfilled. Ignora